Shatabdi Roy wrote that she was in “mental anguish”.

On a day Bengal BJP chief Dilip Ghosh claimed 50 Trinamool MLAs would join the opposition party next month in a counter to minister Jyotipriya Mallik saying six to seven BJP MPs would switch sides in May, a social media post by Trinamool’s MP from Birbhum has set off ripples amid the battle of attrition between the two sides ahead of state elections due this year.

“If I take a decision, then I will let you know at 2 pm on the 16th of January.” That was the cryptic sign off in a social media post written on her fan club page by celebrated actor-turned-politician Shatabdi Roy who has represented Birbhum since 2009.

NDTV has not independently verified whether it is indeed Shatabdi Roy who has posted the message or wither the fan club page is an official one.

Ms Roy was seen walking at the march with Mamata Banerjee on December 29 at Bolpur. Ever since the post appeared around 5 pm, Ms Roy’s phone has been out of reach.

In her message to people of her constituency on the Shatabdi Roy Fans’ Club Facebook, the member of parliament wrote she was in “mental anguish” that she was unable to be with them as much as she would like to because she was not being invited to several programmes. 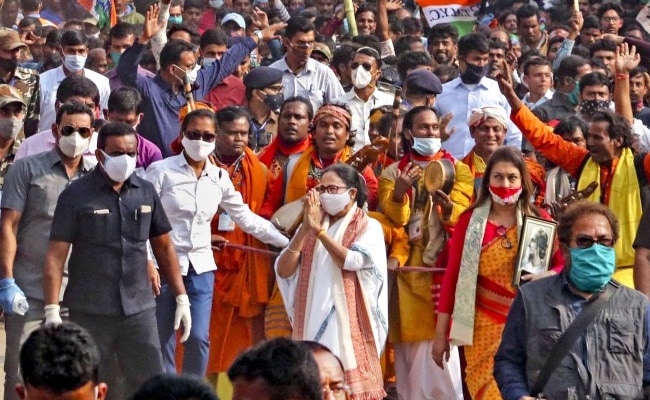 Shatabdi Roy was seen with Mamata Banerjee at a march last month in West Bengal’s Bolpur.

The post goes on to say, “In the new year I am trying to take decisions that will enable me to be with you fully. I am grateful to you. Since 2009, you have supported me and sent me to Lok Sabha. I hope I will get continue to get your affection in future. The people of Bengal have loved me from much before I became a member of parliament. I will also continue to try and do my duty. If I take a decision, then I will let you know at 2:00 pm on the 16th of January,” she said.

Fellow Trinamool parliamentarian Sougata Roy expressed surprise at her comments about mental anguish and said he would wait till Saturday to see what decision she takes and about what. Other than that, there have been no comments from the Trinamool Congress so far.

It may just be a coincidence but another Trinamool leader, minister Rajib Banerjee, who has also struck somewhat discordant notes about his party in the last month or so, has also announced on his social media page that he will hold a Facebook Live address on Saturday, 16 January at 3 pm.

Top Trinamool leader Partha Chatterjee has held two rounds of talks with Rajib Banerjee in the last few weeks. But Mr Banerjee is believed to not be placated yet.

According to sources in Birbhum district, Shatabdi Roy may have genuine reasons for “mental anguish” as the Trinamool’s district leadership has allegedly been sidelining her for some time.

On 19th December, seven Trinamool MLAs as well as a sitting MP joined the BJP in the presence of Union Home Minister Amit Shah. The Trinamool has dismissed their “betrayal” as “good riddance to bad rubbish”.