If not for the IPL 2020, who would have known that Wasim Jaffer has this fun side also to him. The former India opener and Ranji Trophy legend has been on fire ever since trolling Ravi Shastri after the Anil Kumble-coached side Kings XI Punjab (KXIP) defeated Virat Kohli-led Royal Challengers Bangalore (RCB) by 8 wickets in a last ball thriller.

His sense of humour and the ‘art’ of finding the most apt meme for any given situation is giving a tough competition to even the most professional memers. On Saturday, Wasim Jaffer, the KXIP batting coach, was at it again.

The 42-year-old shared a still from Bollywood movie ‘Lagaan’ which was a fiction based on a cricket match between a bunch of local villagers and Britishers in 1892 India. In one the climax scenes of the movie, a British bowler ‘Mankads’ youngest member of the team Tipu, who stitches a gustsy partnership with the protagonist and team’s captain Bhuvan (potrayed by actor Aamir Khan) at a crucial juncture of the match. Jaffer has tagged India off-spinner Ravichandran Ashwin in that very still from the movie.

Notably, Ashwin has been one of the most vocal supporters of ‘Mankading’ ever since using the method to dismiss Rajasthan Royals (RR) batsman Jos Buttler (RR) in IPL 2019. Ashwin had a chance of “Mankading’ RCB opener Aaron Finch in the 13th edition but he decided to let him go with a warning. In the past, Ashwin has also suggested run penalties if the batsman is caught leaving the crease before the bowler bowls a delivery. 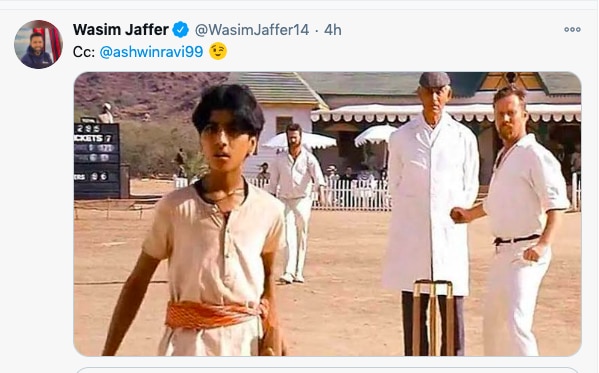 The 34-year-old also reacted to the hilarious post shared by Wasim Jaffer.

Ashwin is currently in Australia and is prepping up for the 4-match Test series which kicks off from December 17 in Adelaide.