Sanjana Sanghi, who is known for her performance in Dil Bechara, has joined the cast of Aditya Roy Kapur’s new film Om – The Battle Within. The actress will play the lead actress named Kavya in the film. On Monday, Aditya Roy Kapur welcomed her onboard by sharing a post for her on his Instagram story. Sanjana also expressed her happiness about joining the film on Instagram. She shared a video of herself and wrote: “KICKED. Humbled. And so grateful to finally be sharing with you all my excitement of being and becoming the incredibly inspiring Kavya, and embarking on my next journey of Om – The Battle Within. With the best team! Aditya Roy Kapur – let’s do this!” 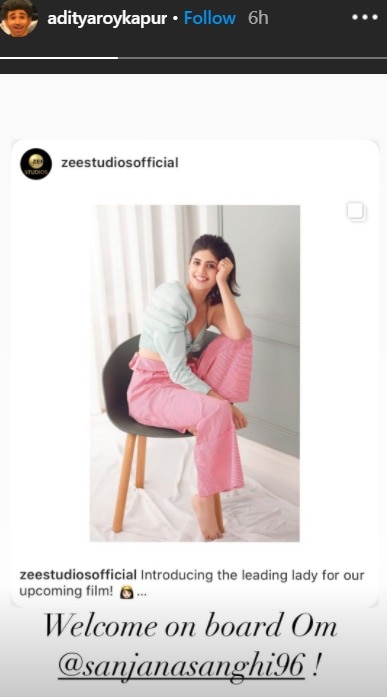 Om – The Battle Within will be directed by Kapil Verma and co-produced by Ahmed Khan, his wife Shaira Khan and Zee Studios. Other than Aditya Roy Kapur and Sanjana Sanghi, details about the rest of the cast have not been disclosed yet.

Talking about the film, Sanjana Sanghi told Mumbai Mirror: “I explored many scripts, but OM offered me the spectrum jump that I was looking for, giving me an entirely unchartered territory of a big commercial actioner.”

When asked about her role in the film, she told the publication: “She’s someone every young Indian girl aspires to be, and a character one hasn’t seen before. I am excited because I will get to do a lot of action for which various kinds of training and prep is currently on. It’s testing, both physically and mentally but thrilling too.”

The shooting schedule of Om – The Battle Within is expected to start next month and the film will reportedly release next year.