Kriti Sanon has been mesmerising her fans with her mind as much as she has with her beauty. Over the past couple of months, as we were figuring out how to navigate our lives during the novel coronavirus pandemic, Kriti turned to poetry. She recently penned down another heart-touching poem and shared it on Instagram.

Kriti Sanon shared stunning monochrome pictures along with her latest poem. Her words hit the right notes. The poem reads, “I want to be the black and white moment. That flashes in front of your eyes. When you hum. Your favourite tune. Your soul song —Kriti Sanon #SanonScribbles #PoetryWithKriti #PoetryLover (sic).”

A couple of days ago, Kriti Sanon had penned an empowering poem about unleashing the heart. She shared her striking words on Instagram. It read, “For once in life, Unleash your heart, And let it take the lead, Let it twirl you fearlessly, And sweep you off your feet, Listen, as it whispers the song, That made it skip a beat, It knows no right, It knows no wrong, Just loves, hurts, forgives & repeats — Kriti Sanon #SanonScribbles #PoetryWithKriti (sic).”

HOW DID CELEBRITIES REACT? 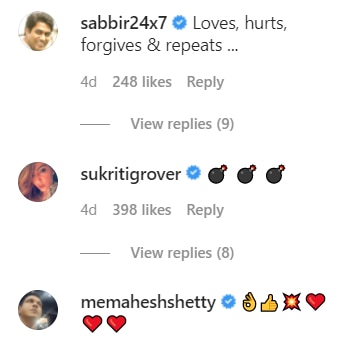 WHAT’S ON THE WORK FRONT?

Kriti Sanon will next be seen in Laxman Utekar’s Mimi. Also starring Pankaj Tripathi, the actress has wrapped up the film’s shoot. She also has Farhad Samji’s Bachchan Pandey in the pipeline. The film is the Hindi remake of 2014 Tamil film Veeram and will feature Akshay Kumar in the lead role. Bachchan Pandey’s shooting will begin in January 2021. Kriti was last seen in Ashutosh Gowarikar’s Panipat alongside Arjun Kapoor.

ALSO READ | It’s not about you, it’s about them: Kriti Sanon in new post on Sushant Singh Rajput death chaos